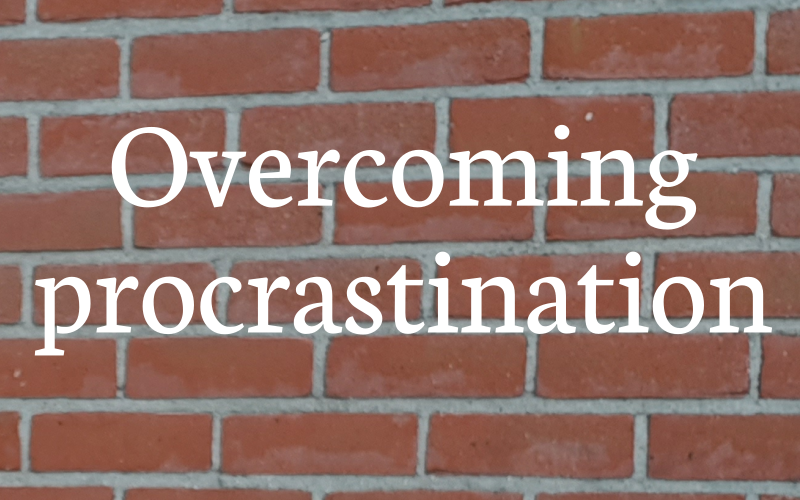 Got a big plan to pull off, but feeling all over the place? Feel like you’re running round in circles? Or simply Can’t Be Arsed? You need – and want – to overcome your procrastinating.

So many people face this every day.

Whatever you try, they don’t work.

Or they do work, until they don’t. They’re just temporary fixes that lose their shine, when you lose your way again.

It might sound weird to you, but there are usually only a couple of things going on.

As much as we like to overcomplicate things, or imagine that we need a complicated system to fix our seemingly intractable productivity issues, procrastination boils down to just two things:

Let’s get the action plan and resources checked off first.

If you haven’t got your action plan and resources set up, you’re going to be flapping around not clear about what, where, when or how to begin.

Check through these questions:

If you answer ‘no’ to any of these questions, this is where you start.

Work on your action plan and get your resources in place.

Action plans are not my forte, seriously, so go put yourself into finding-out mode and go find advice on making workable action plans.

If your action plan and resources don’t add up, and you can’t get them to work, admit that it’s a non-viable project – or negotiate to get what you need to be able to fulfil it.

However, if you have a plan and resources, AND you’ve checked it yourself and with other people’s input to make sure it’s sensible, comprehensive, and feasible, and you’re just not executing it, it’s not your action plan or resources that’re the problem.

Internal obstacles, often misleadingly referred to as ‘mindset’ issues, may be getting in your way.  These issues are not just your mind. They feature across your whole body-mind-emotions-energy system.

Past events leave an imprint. A memory. An emotional memory. A physical memory.

They create our beliefs – often totally subconscious – about ourselves, other people, the world, and how these interact. Any unresolved emotions are left stuck in your body and energy somewhere. This is Stuff.

In short, we have Stuff in our systems.

This Stuff is what our blockages are made of. Our internal barriers. Our getting-in-our-own-way.

This Stuff is what causes procrastination later on.

I divide internal causes of procrastination loosely into two bundles: stuff from now, and stuff from then.

When there’s a lot of stuff going on in your life – moving house, changing manager, different responsibilities, etc – your internal base stress level is up.

Think of your own internal task manager.

When your processing cycles are used up on thinking about the removals firm, figuring out how best to get on with your new manager (and missing or, let’s be honest, feeling relieved your old boss is out of the picture), and growing into your new responsibilities, your emotional CPU is busy.

Your availability, your engagement in other projects is just not going to be up to scratch.

You might not have factored it in, but your personal resources are low.

Overcoming procrastination, if you’re dealing with a lot of Stuff from now, means focusing on the other stuff for a while.

If you can, take some time out, get some support handling your emotional/stress load (yeah, I mean a counsellor – those people are good, by the way), go do some sport… whatever helps you shift your baseline.

If you’ve got an action plan, you’ve mostly got your other stressors managed enough, and you still can’t get your arse into gear and Do The Things, read on.

When your action plan is sound, your current stresses are managed well enough, and you’re still procrastinating, you probably have some Old Stuff stuck in your system.

This Old Stuff can come from your adult life, teen years, or childhood.

In my own experience, I’ve hit wall after wall because of deeper issues from my childhood. Deeply rooted fears about painful consequences of being visible, successful, or even doing what I want, locked me firmly in place, for years, until they were uprooted.

A client of mine was struggling terribly with procrastination until we cleared some energy and feelings of guilt and upset around a loan to a friend that had gone wrong. After that? They zoomed on ahead with getting more stuff done than they had in a long time.

Another client kept running self-sabotage procrastination patterns until we found and reconciled the parts of her that had been repeatedly and deeply ignored and neglected as a child.

You might be wondering why – or how – that can possibly related, or how you can fix it without simply going over and over your old stories (again).

That’s where my unique set of skills comes in. I help you find, feel and release the feelings stuck in your body from years, even decades, ago.

It is possible to be free of these self-sabotage patterns.

Let’s look at how these kinds of procrastination manifest – then dive in to what you can do to overcome them.

You know what to do. Every time you think about doing it, or get yourself lined up to start, your anxiety level shoots through the roof. Your palms go sweaty. Your heart races. You just don’t know how you’re going to do it without panicking.

The anxiety wall has sprung up between you and your tasklist.

The action plan is simple. The steps are do-able. Why do they feel so damn hard?

You’re sure that you should be bombing along, blasting your way through like a to-do torpedo, but instead you’re barely crawling through, bogged down.

It doesn’t flow, it doesn’t feel good, and you’re getting despondent.

The JFDI people can shout as loudly as they like, and you just…don’t.

It’s extraordinarily baffling. It’s not like ‘normal’ procrastination. You feel a bit awkward about the whole thing, but there’s no anxiety. There’s no beating-yourself-up. There’s just…no doing, either.

You just Can’t Be Arsed.

Underneath all of these procrastination types is some kind of internal stuff going on.

When you reach a good point in your life, things are more stable than they’ve been for a while, you have a little more space and time on your hands: Stuff From Then emerges for repair. The body’s capability to wait for enough safety and resources to be available for healing is amazes me every time – and it’ll slow you down or stop you almost entirely until you’ve processed it.

Working with my clients to help them process their Stuff From Then (a.k.a. trauma, or unexpressed, unreleased emotions that are now stuck in the body), releases them from the cesspool of stuckness. Lighter, freer, with more energy, they zoom off into the world without the handbrake stuck on.

A deeper possibility, related, but slightly different, is that the Stuff From Then is tying you up with beliefs, barely ever conscious, but present and affecting you every day nonetheless.

These beliefs, tied in place with strong emotions, probably got laid down when you were fairly young.

Deep, deep belief that Doing The Thing will lead to Bad Consequences. Not just bad consequences, but a Disaster.

If set early enough – given how baby and child logic can be all-encompassing and totally not grown-up logic – your Disaster belief might be:

If I Do The Thing I’m Going To Die. Or Be Injured. Or Abused.

No joke, your psyche is totally serious about this.

Of course, if you come close to Doing The Thing that it believes will make you die, your psyche will pull all kinds of moves to keep you safe.

You can’t overcome procrastination until you undo the underlying beliefs that stop you making progress.

Procrastination is a symptom of trauma, not a thing that appears out of nowhere.

This is why I say self-sabotage is self-protection.

Procrastination is rarely, if ever, laziness.

Your psyche is doing its level best to keep you safe. It never got the updates that you are already safe. That Doing The Thing is safe.

These kinds of fears can be so deep, set down in your psyche so early, that you’re barely aware of them directly. They do show up in your behaviour, though.

Here’s how it works

If you’re prone to over-thinking, the fears are there underneath, generating all kinds of other thoughts as to why you can’t, won’t, wont’ be able to, and don’t do the thing. A fear-driven anxiety-generating popcorn machine that you experience as the Anxiety Wall.

If you’re making steps towards Doing The Thing, your psyche will slow you down. Doing the Things will feel harder than it realistically should. This is Walking Through Mud.

Like a non-Newtonian custard mix, the harder you push, the stronger your psyche will resist you.

So when your psyche sees you seriously making strides towards Doing The Thing, it will find ways to demotivate you entirely from Doing The Thing. This is the bafflingly simple Can’t Be Arsed.

So how do you overcome procrastination?

To get on with Doing The Things, you have to SHOW your psyche – not convince it, but show it – that Doing The Thing won’t kill or hurt you. That’s the key to overcoming procrastination caused by deeper, underlying inner Stuff.

If Doing The Thing carries a risk that you’ll get hurt or uncomfortable, you have to show your psyche you can handle the hurt or discomfort, whether that’s on your own or with other people’s support.

In short, the causes of procrastination boil down to two things: an incomplete action plan, or internal obstacles.

If you have a plan and resources but no progress, look towards your internal Stuff. These are the unresolved emotions lurking in your psyche, stored in your body, triggering procrastination until you release them.

You can release these emotional blockages by somehow Doing The Thing, showing your psyche it’s safe to Do The Thing (and you can handle the risks and consequences if it’s not 100% safe), or by getting support from a coach, therapist or healing practitioner to help you overcome procrastination.

I help people to release the emotions underneath that block progress and living as your full self.

Take a look at how you can work with me to free your mind, your energy and yourself from past experiences that’ve been bogging you down.

This website uses cookies to improve your experience while you navigate through the website. Out of these, the cookies that are categorized as necessary are stored on your browser as they are essential for the working of basic functionalities of the website. We also use third-party cookies that help us analyze and understand how you use this website. These cookies will be stored in your browser only with your consent. You also have the option to opt-out of these cookies. But opting out of some of these cookies may affect your browsing experience.
Necessary Always Enabled
Necessary cookies are absolutely essential for the website to function properly. This category only includes cookies that ensures basic functionalities and security features of the website. These cookies do not store any personal information.
Non-necessary
Any cookies that may not be particularly necessary for the website to function and is used specifically to collect user personal data via analytics, ads, other embedded contents are termed as non-necessary cookies. It is mandatory to procure user consent prior to running these cookies on your website.
SAVE & ACCEPT