The number of intuitive scientists – and other tech peeps – I’ve met is…. HIGH.

The number of sciencey peeps who’ll publicly OWN their intuitive skills is… MINIMAL.

Why is something so damn useful, supposed to not bloody exist?

Like it or not, if you’re sciencey, you’re more intuitive than most, only you don’t know it because hey, don’t everyone’s brains work like that?

Or if you DO know it, you’re damn well not going to fess up on it.

It’s only in the last 100 or so years that intuition has been harshly sidelined like the flamboyant star player parked on the bench by the grouching ‘do it my way’ team coach in a fit of grump.

Before that, we had Galileo holding lead balls in the hand while falling asleep so he could catch dreamzone inspiration.

We had Einstein raving about imagination.

We had Cavendish going out on nighttime perambulations, deep diving into the mysteries of how to weigh the earth – and finally doing it.

But also from creative leaps of genius firing interdisciplinary synapses almost at random but totally on target.

Intuition IS the targetfinder.

In-built course control, short-circuit finder, knows the backstreets you have no clue about kind of satnav.

Like a sharp-eyed taxi driver who knows how to get you from A to Z without having to navigate cumbersomely through B, C, D…

Whether that’s to get you out of depression towards happiness, from a dull job to a brilliantly stimulating and rewarding one, or to the next creative leap in the lab, honing your intuition is what’ll get you there.

What breakthroughs are you missing out on? 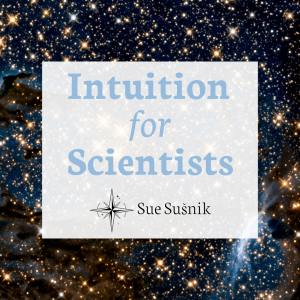 Want to tune up YOUR intuition?

Come join me on an intuitive deep dive into mastering your intuition.

This website uses cookies to improve your experience while you navigate through the website. Out of these, the cookies that are categorized as necessary are stored on your browser as they are essential for the working of basic functionalities of the website. We also use third-party cookies that help us analyze and understand how you use this website. These cookies will be stored in your browser only with your consent. You also have the option to opt-out of these cookies. But opting out of some of these cookies may affect your browsing experience.
Necessary Always Enabled
Necessary cookies are absolutely essential for the website to function properly. This category only includes cookies that ensures basic functionalities and security features of the website. These cookies do not store any personal information.
Non-necessary
Any cookies that may not be particularly necessary for the website to function and is used specifically to collect user personal data via analytics, ads, other embedded contents are termed as non-necessary cookies. It is mandatory to procure user consent prior to running these cookies on your website.
SAVE & ACCEPT